Five years ago today … and a special celebration offer

Posted on February 4, 2018 by alexmarchantblog

Five years ago today, the world held its breath as a press conference got underway in Leicester, a smallish city in the English Midlands.

Well, I held my breath anyway, and from the reaction at the end, it appeared that plenty of other people had too.

For several months, since two previous press conferences in the city in August and September 2012 – the first to announce an archaeological dig, the second to proclaim that a grave had been found on that dig – I’d been waiting for what I rationally knew would be announced. Because everything pointed to the same conclusion, even if some of us (well, me anyway) preferred to wait for the science of DNA analysis to confirm it.

And that conclusion was, of course, that the grave of King Richard III had been found – ‘beyond reasonable doubt’.

The press conference erupted into applause, #RichardIII began to trend on Twitter, and some of those watching had a tear or two in their eyes because we had long thought that perhaps the King would never be found. Not so Philippa Langley, John Ashdown-Hill and their colleagues in the Looking for Richard team of course, who were pretty sure they knew where to search and had spent several years persuading others to actually do that searching, while also tracking down the last female-line descendant of Richard’s mother to ensure that, when he was found, there would be DNA to test to prove it was him – beyond reasonable doubt.

Well, all that hard work paid off royally (if you’ll excuse the pun). And not only was there now a full DNA profile and a facial reconstruction (unveiled later that evening in the accompanying documentary ‘The King in the Car Park’), but we also knew without question that King Richard was not a ‘hunchback’ as the Tudors had always claimed, and had been accepted without question for centuries. Nor was there any sign that he had had a ‘withered arm’.

What had been discovered was that the King suffered (and I use the word advisedly) from scoliosis – a lateral curvature of the spine, not to be confused with kyphosis, which indeed presents as a ‘hump’ on someone’s back. Scoliosis is a far from rare condition which often becomes apparent during adolescence, but is not generally noticeable to others. Only the King’s most intimate attendants, closest friends and family members would have likely been aware he had the condition. It can cause pain but is not necessarily disabling, and nowadays is eminently treatable. Nowadays.

In the case of King Richard, the curvature was quite severe and, had he lived longer, might well have had more of an effect on him. But it’s thought that at most it would have meant one shoulder was a little higher than the other (which could easily be disguised with well-tailored clothes given the fashions of the time). And it’s certain that the condition didn’t stop him riding into battle and fighting on foot – as we know that even his enemies credited him with ‘fighting manfully in the thickest press of his enemies’ in his final battle at Bosworth Field. The battle wounds that left their horrendous marks on his skeleton are testament to the truth of those words.

Since the discovery of King Richard’s scoliosis, many of us have become more aware of others who have the condition – among them some very famous people who haven’t let it define them or get in the way of anything they’ve set themselves to do. Perhaps the most famous is champion sprinter Usain Bolt – fastest man on earth, winner of umpteen gold medals. Others include film stars Elizabeth Taylor, Rene Russo and Liza Minelli, rock legends Kurt Cobain and John (‘Johnny Rotten’) Lydon, cellist Yo-Yo Ma and General Douglas MacArthur.

Queen Elizabeth II’s granddaughter, Princess Eugenie, in 2018 married in a specially designed wedding gown– specially designed to show off the scar from the operation she had as a teenager to correct the curve in her spine caused by her scoliosis. She did it to raise awareness of the condition and of the great work being carried out by surgeons and other health professionals to improve the lives of people with this condition  Princess Eugenie is, of course, King Richard’s great-great-great-etc. grand-niece too. 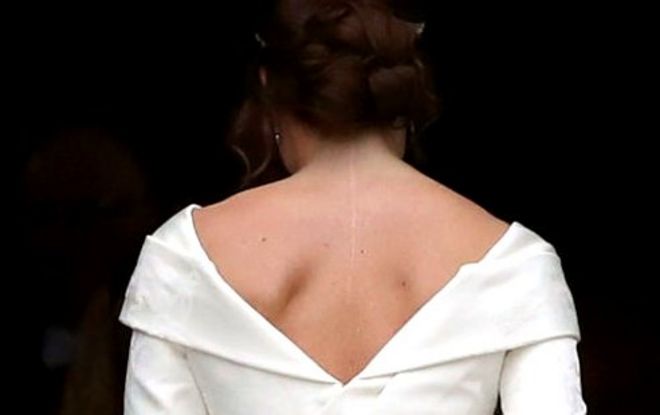 In the UK, an organization called the Scoliosis Association UK (SAUK.org.uk) exists to support and offer information to people with the condition. And this is where the offer I mentioned above comes in.

To celebrate the fifth anniversary of the announcement that King Richard’s grave had been found (and the inspiration it gave me to finally write my books about the King – see my previous blog post ‘Five years ago … the impact of King Richard’s discovery’), I’m making available a short story I’ve written titled ‘The Beast of Middleham Moor’.  There will be no prizes for guessing who may make an appearance in it!

A short ghost story, ‘The Beast of Middleham Moor’ is set in the countryside around King Richard’s primary home in Wensleydale, Yorkshire. Jack, a local boy in the twenty-first century, bullied at school, flees from the school bus and takes a short cut across the moor as a snowstorm looms, despite fearing the local legend of ‘the Beast’…

‘The Beast of Middleham Moor’ is available as a pdf in return for a donation to Scoliosis UK (minimum £1 please) via Virgin Money Giving at the following link (which also gives full details):

All money will go direct to SAUK. Once you have donated, please contact me with your details and I will email or message the story to you as soon as I can! I can attach it in Messenger on Facebook (via Alex Marchant Author) if you prefer that to sending me your email address, or you can email me at my contact details on my WordPress.com home page.

(For non-UK donations, if the VirginMoneyGiving link doesn’t work, please email me and perhaps PayPal will be appropriate.)

I hope you enjoy the story if you order it and that together, in celebration of the anniversary of this remarkable event, we can raise some money for a very worthwhile cause that would no doubt have been close to King Richard’s heart. And of course, if you do enjoy it, please let people know!