Posted on March 30, 2018 by alexmarchantblog

It’s Good Friday today in the UK, or Easter Friday if you prefer. The end of Lent – the most solemn ‘festival’ in the Christian calendar, the 40 days leading up to the day Jesus died on the cross (today) and the day it is believed he came back to life (Easter Sunday).

In different places (Orthodox countries, for example), Easter is celebrated at different times, and many other places of course don’t celebrate it at all. And where it is marked, different traditions are followed. The traditions I know are those I grew up with (in a largely non-religious family, but surrounded nonetheless by Christianity-infused, though mostly pagan-based, spring rituals). And my research for ‘The Order of the White Boar’ taught me a little more about those traditions as they existed (or evolved) during the medieval period, under the watchful eye of the Catholic church.

Below you will find a short excerpt describing the Easter celebrations at Middleham Castle in 1483 – shortly before Matthew’s and Duke Richard’s lives are rocked by the earthquake event that is about to come. But as I was eating my breakfast this morning (hot cross buns, of course), my eye was caught by a sentence in the foodie magazine I was flicking through (last Saturday’s ‘Feast’ from the Guardian newspaper,  www.theguardian.com/lifeandstyle/2018/mar/24/meera-sodhas-vegan-recipe-for-jamaican-easter-buns) and I thought I’d share it with you too. 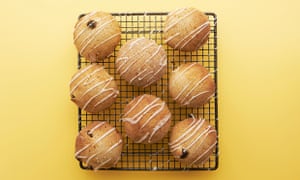 (Photograph: Rob White for the Guardian)

According to the writer, Meera Sodha, ‘In 1592, Queen Elizabeth forbade bakeries in England to make any spiced buns except for burials, Easter Friday or at Christmas.’

Hot cross buns, one type of those spiced buns mentioned, are a British tradition. Eaten on Good Friday as a celebratory symbol of the end of the Lenten fast, using several of those lovely ingredients (eggs, flour, butter, spice, dried fruit) that are forbidden to anyone devoutly following the rules (for the 40 days after the annual pancake feast on Shrove Tuesday that uses up the previous stock of some of them). And delicious they are too – so delicious that a German exchange student who once visited us at Easter-time couldn’t get enough of them, and went home with several packs in her suitcase. 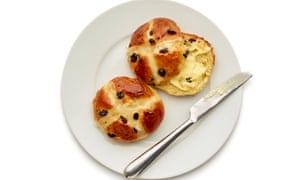 But that snippet of information about Queen Elizabeth I was news to me.

As a historical writer I should perhaps check its truth, but I’m pretty  busy at the moment and – you know what? – as a Ricardian, I’m expected by many to always believe the worst of anyone in the Tudor dynasty, so I’m going to accept it without searching for the source. Because it fits with ‘my view’ of the Tudors perhaps? The view that they were less fun that the kings who went before, that they passed a lot of laws that penalized ordinary people, that they banned and proscribed things that people enjoyed and ordered people around more than the previous Plantagenet dynasty? Well, not really. More to do with the fact that I have only two days until I go on holiday and I haven’t started packing yet!

Anyway, apparently the law may have been because such spiced buns were too special to be eaten all year round (and like Felicity Cloake in the same issue I agree and also used to ‘rail, Canute-like, against the ever-earlier appearance of the hot cross bun each spring’:  https://www.theguardian.com/lifeandstyle/2018/mar/20/hot-cross-buns-recipe-masterclass-felicity-cloake). However, in Jamaica no such law was passed – hence the first-mentioned recipe above, which can be eaten all year it seems.

And so to that other Easter delicacy: eggs. Most often chocolate nowadays – made from cocoa brought from the New World only in the sixteenth century. In Matthew’s England, and many places still today, they were real eggs, and ‘egg-rolling’ and egg painting were Easter pastimes. Painting the eggs even developed into the fabulous jewelled Fabergé eggs of the early twentieth century.

Eggs are of course an ancient symbol of rebirth in spring, from long before the Catholic church itself was born. And spring 1483 was when both Matthew’s and Duke Richard’s lives changed for ever.

“The leaf buds were fattening on the trees and the first lambs appearing before the Duke returned from Pontefract.

He brought with him special sweetmeats from the local bakers to help us break our Lenten fast, after weeks of eating little more than fish from the river and castle ponds. Then, after the solemn Good Friday unveiling of the Cross and the Easter vigil, we pages begged eggs from the kitchens’ stockpiles, stored since Ash Wednesday. We boiled them hard in onion-skin dyes to roll them down the slopes in the Duchess’s pleasure gardens.

The squires looked on, with good humour or disdain, too old now for such childish pastimes. But, to my surprise, and to the laughter of the ladies who gathered to watch us, not only Masters Lovell, Ratcliffe and Kendall, and various other gentlemen, but Duke Richard himself joined us.

Each of the gentlemen had brought his own egg, except it seemed the Duke.

For a moment, there was disappointment on his face. Sir Francis declared, ‘Then this year I have a chance of winning.’

But the Duke called Alys forward from where she was waiting with the other ladies.

Her dimples showing, she stepped up to him, bringing from behind her back a small casket. As she lifted the lid, there, nestled in black velvet, was the largest egg I had ever seen. It was intricately painted with swirls of red, blue, green, gold, putting our home-dyed hens’ eggs to shame.

‘The swans of Pontefract obliged me,’ said the Duke, picking it up with a flourish.

He beckoned to his son, who had been fidgeting next to me as the scene played out and now leapt forward with sparkling eyes.

So the Duke and his son swept all before them, not only racing the smaller eggs to the bottom of the slope, but surviving without so much as a hair’s crack.”

More about Easter eggs in the medieval period can be found in my next blog on Sunday – reposted from the British Library.