Posted on April 9, 2018 by alexmarchantblog

On this day in 1483, King Edward IV died at the age of just 40. He had ruled England for 22 years (with a short break in 1470-1 when Henry VI was briefly restored to the throne), the last 12 of them in relative peace after the tumult of the ‘Wars of the Roses’. 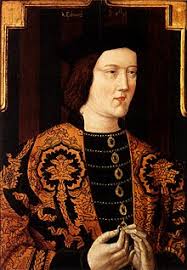 He left behind him a 12-year-old son to inherit his crown as Edward V, and in his will named his youngest, and only surviving, brother, Richard, Duke of Gloucester as protector of the kingdom.

It’s unclear exactly how Edward died. He was a strong, apparently healthy man of middle age, if perhaps a little overweight in recent years. Various suggestions have been put forward, including apoplexy (nowadays known as a stroke) and a ‘chill’, supposedly caught on a fishing trip, although as this was the Easter season, such pastimes may not have been approved of in Catholic England. More recently, it has been suggested that he may have been poisoned with arsenic (a form of murder then becoming fashionable on the continent). Whatever the truth, it was a sudden, unexpected death that led ultimately to the turmoil of the ‘Year of the Three Kings’.

‘The Order of the White Boar’ comes to an end soon after the news of Edward’s death reaches Duke Richard in Middleham. And the soon-to-be-published sequel, ‘The King’s Man’, begins on the road to London, as the Duke and his retinue travel south to meet with the new King on his way to be crowned in the city.

At Northampton they are met by two of the young King’s other uncles, Earl Rivers and Henry, Duke of Buckingham. The gentlemen spend a pleasant evening dining in an inn together, then after Rivers retires to bed, Dukes Richard and Henry sit up, talking . . .

“Buckingham drank deeply, then placed his cup down on the table, with care this time, and gazed across at Duke Richard. His next words seemed chosen in a more deliberate fashion.

‘And if the rumour I hear is true?’

‘They say it has become all the rage at the Italian courts.’

Without a second’s hesitation, Duke Richard shook his head.

‘Nay, cousin, rumours are dangerous beasts and should not be believed lightly. Hastings’ messenger said apoplexy.’

Buckingham sat back again, revolving his wine-cup slowly with the fingers of one hand, while watching his fellow Duke.

‘Apoplexy can take many forms, so too can poisoning. But how often does a man recover from apoplexy, only to die of it a week later.’

‘Hastings did not report that.’

‘They say the King fell ill, then rallied. But after several days, and an evening spent in the bosom of his wife’s family . . . The first illness was a failed attempt – seven days later came success.’

A moment of quiet. The gentlemen from Yorkshire exchanged glances, the candlelight catching their eyes.

When Duke Richard remained silent, my lord of Buckingham ploughed on.

‘It is perhaps no coincidence that Dorset was made deputy constable of the Tower only weeks before. In preparation for seizing power – and the royal treasure. They say Edward Woodville has shipped half of the treasury away to his fleet in the Channel.’

‘I have heard that about my brother’s treasure also, and perhaps it is true. But I cannot believe the Queen capable of such a crime as murder. She loved my brother . . . at least, once she did.’

‘Yet now her charms have faded – you saw for yourself at Yuletide. Mistress Shore and others have become favourites. And they say Hastings himself has had a part to play in that. Elizabeth’s hold over Edward was perhaps broken and her family feared their grip on power ending. When so threatened, it takes little to drive a pack of dogs to turn on the hand that feeds them.’

‘But not to kill a king. That is a crime beyond all others. No, even the Woodvilles, for all their scheming, could not turn to that . . . .’”

Perhaps we’ll never know how Edward IV died. But he cannot have known, as he drew his final breaths, what difficulties he would bequeath to those he left behind . . .