Posted on June 8, 2018 by alexmarchantblog

Have you ever had a moment when you think: ‘I wish I’d had that idea!’

That was how I felt when I first came across the first Kindred Spirits novel by fellow Ricardian author Jennifer C. Wilson. It’s such a clever premise – the idea that, not only do ghosts hang around places that were significant to them in their lifetimes, but they also have to share some of those places with other ghosts. And build relationships with them because, you know, you’re tied to that place for – well, for eternity perhaps.

And what if that significant place is also significant in history – and to very many other historical figures?

The Tower of London, for example. Almost a thousand years of history. And right in the centre of politics and government for much of that time. That’s a lot of people… 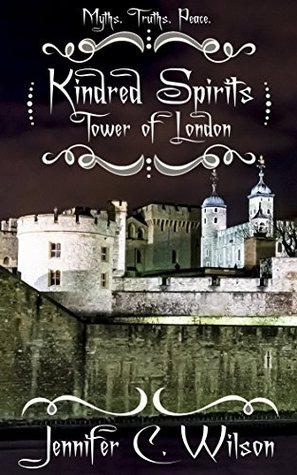 And two of the most famous (infamous?) historical people associated with the Tower have to be King Richard III and Anne Boleyn – in very different ways and very different times in history. So what happens if they strike up a friendship?

As Jen says, ‘In the Kindred Spirits series, we meet the ghosts of historical characters, in a range of contemporary settings. Have you ever wondered what Richard III and Anne Boleyn might have in common, or what happens when the visitors leave some of the most popular attractions in the country? Well, here’s your chance!’

See what I mean? A great idea – and you could have such fun with it. As Jennifer does. So much fun, in fact that she couldn’t resist doing it all again – this time on Edinburgh’s Royal Mile. Different country, different faces.

But today, Jen is back in London – or at least Westminster (I could go all medieval and insist it’s a different city – but let’s face it, few enough see it as that nowadays…). For today is publication day for her latest instalment – Kindred Spirits: Westminster Abbey – another ancient place full of fascinating characters just waiting to interact for your delectation…

As the blurb says:

‘With over three thousand burials and memorials, including seventeen monarchs, life for the ghostly community of Westminster Abbey was never going to be a quiet one. Add in some fiery Tudor tempers, and several centuries-old feuds, and things can only go one way: chaotic.

Against the backdrop of England’s most important church, though, it isn’t all tempers and tantrums. Poets’ Corner hosts poetry battles and writing workshops, and close friendships form across the ages.

With the arrival of Mary Queen of Scots, however, battle ensues. Will Queens Mary I and Elizabeth I ever find their common ground, and lasting peace?’

Jen and I have been interacting ourselves since we shared a publication day last October (the 2nd of course, King Richard’s birthday, and that of The Order of the White Boar and Jen’s The Last Plantagenet?). We have very different approaches, with my books sticking very firmly to the lives of my characters and hers – well, I do envy the fun she can have and the downright liberties she can take when her historic characters have already faced their tragic (or not-so-tragic) ends, and can shrug off their mortal remnants and roll up their sleeves and get to grips with the afterlife. It has to beat dealing with the inescapable trajectory of traditional historical fiction!

Jen’s Kindred Spirits novels are published by Crooked Cat Books and available via Amazon, along with her self-published timeslip novella, The Last Plantagenet? She can be found online at her blog, and on Facebook, Twitter and Instagram.