What a week! King #RichardIII’s birthday, a #KindleCountdownDeal and a special announcement to come… #WatchThisSpace

Posted on October 4, 2018 by alexmarchantblog

It’s been quite a week!

First came the Richard III Society AGM in Leicester – my first – where it was lovely to meet some old friends and some new.

Thanks to Ian Churchward for the pic

Next came King Richard’s birthday celebrations, with a whistlestop visit to Middleham Castle in celebration of this special day. Many thanks to Gill at the castle for inviting me, and to Rosemary, whose idea it was to mark His Grace’s birthday with a party. I was honoured to be asked to cut the cake on King Richard’s behalf. 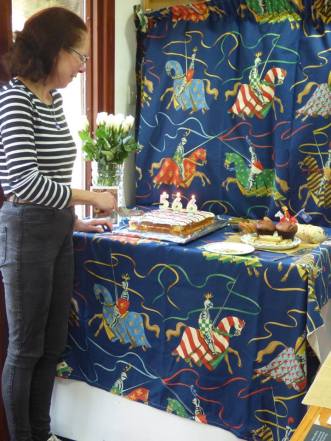 The entrance building and statue were decked out with banners (birthday as well as white boar) and all visitors were offered some lovely cake (or gluten-free alternative). Thank you to Sarah at the Priory guest house for making it – it really was superb.

Other special guests included their royal highnesses Queen Amy and Prince Rupert, decked out in their murrey and blue finery, and visitors to the castle from as far afield as Alberta, Missouri and Sydney. Not all were bemused to be asked to celebrate the 566th birthday of a monarch

And to cap the week, there will be a special announcement made this coming weekend. Don’t forget to check in at my blog or Facebook page or on Twitter to find out just what it’s all about!

And of course, no author post would be complete without a reminder that ‘The King’s Man’, sequel to ‘The Order of the White Boar’ is on an Amazon Kindle Countdown deal this week to celebrate King Richard’s birthday – starting at just 99p/99c and rising over coming days before returning to its RRP. Grab one for yourself or a friend!