A new charity anthology of ‘Yorkist Stories’: an interview with Michèle Schindler

A couple of weeks ago I was delighted to discover that a piece of flash fiction I’d submitted, ‘Confinement’, had been accepted into a new charity anthology compiled in double-quick time by fellow author Michèle Schindler to raise funds for Médecins Sans Frontières / Doctors without Borders during the current global Covid-19 crisis. I’m pleased to welcome Michèle on to my blog today to talk about this collection of short stories about major players in the Wars of the Roses, a little about herself and her fellow contributors, and her fascination with a certain Viscount Lovell…

Alex: Thank you for coming on my blog today, Michèle. You’ve just published a new anthology of short stories by authors inspired by major players in the Wars of the Roses – entitled Yorkist Stories. What gave you the idea?

Michèle: I just really wanted to do something to help in this situation we’re all in right now. Since I’m diabetic and therefore in a risk group, I couldn’t do anything physical to help – make purchases for others at risk, or even donate blood. So I tried to think of something else I could possibly do, and since the one thing I think I’m actually any good at is writing, I thought, why not use that for good? And why do it alone, when working together is more important than ever before? So this idea was born.

Alex: I’m all for collaborative working – especially as you say in these difficult times. Tell us a little more about yourself. What sparked your interest in English medieval history?

Michèle: I’ve always been interested in history, but my specific interest in English medieval history began with a homework assignment when I was around seventeen or so. I was supposed to research the history of Canterbury, for my English class’s field trip there. When I did that, I came across Thomas Becket, and he just fascinated me, so I began researching. Through him, I started slowly getting to know the many, many fascinating people living in England in the Middle Ages. Until finally, I encountered a little-researched man who lived in the fifteenth century, who became my special favourite.

Alex: Your own story in the anthology turns the spotlight on that ‘little-researched man’, namely Francis Lovell. Many will know him as the loyal friend of King Richard III, who appears in my own books so far as a fairly peripheral character (although in my work-in-progress we get to see a little more of him…) He’s far from peripheral in your own work as you’ve recently published a full biography about him: Lovell our Dogge: The Life of Viscount Lovell, Closest Friend of Richard III and Failed Regicide. What is it about Francis that drew you to him? 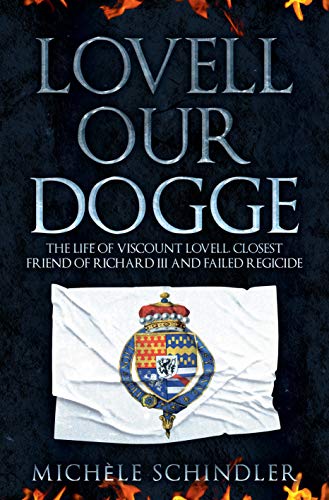 Michèle: I first came across him when reading a biography about Richard III. It was a fairly sympathetic one, I believe David Hipshon’s. He won me over to Richard’s cause in around 2010 or 2011, but more importantly, he briefly mentioned a close friend called Francis Lovell who died fighting for Richard’s cause even after Richard was dead. I was intrigued and tried to find more information about him, but there was hardly any. That didn’t seem right at all. In fact, it almost seemed as if I was called to be the one to remedy that, and so I set about the task. The more I found out about him, the more I loved him – and I still feel as if finding and sharing information about him is something I’m called to do. Most definitely, it is something I love to do.

Alex: King Richard appears in several of the stories, but unlike recent charity anthologies, Grant Me the Carving of My Name and Right Trusty and Well Beloved…, he’s not the main focus in Yorkist Stories. Apart from Francis Lovell, which other historical figures feature in starring roles?

Michèle: There are stories about John Howard, who became Duke of Norfolk very early in Richard’s reign, and Richard’s niece Elizabeth of York, and his illegitimate daughter, Katherine Plantagenet. There is also one about Margaret of York, Richard’s sister, and even about a man most Ricardians rather dislike: William Stanley.

My hope was to see the Yorkist cause from as many points of view as possible, and I hope that everyone’s fabulous stories have made this possible.

Alex: I was delighted to be asked to contribute a story – in my case a piece of flash fiction inspired both by the current pandemic crisis and of course by King Richard himself. Can you tell us a little about your other fellow authors?

Michèle: The first person I asked was a close friend of mine, Robin Kaye – without his enthusiasm for the idea and agreement to write a story, the book wouldn’t have gone ahead. He’s a psychologist with a great interest in history.

After he agreed, many others I asked also did so. Fellow authors such as yourself, Marla Skidmore, Jennifer Wilson, Joanne Larner [all of whom contributed stories to Grant Me the Carving of My Name and/or Right Trusty and Well Beloved…; see previous blog posts], Joan Szechtman, Jessie Prichard Hunter and, as well as personal friends of mine who share my obsession with history and the Wars of the Roses, such as Elizabeth Celeone and Stephanie O’Neill. And of course, several amazing and talented people I met either online or in real life through conversations about the Wars of the Roses: Maria Grazia Lucrezia Leotta, Doris Schneider-Coutandin, Valery Alliez, Brian Wainwright, Kit Mareska, Terri Beckett and Wendy Johnson [the last four of whom also contributed stories to Right Trusty and Well Beloved…; see previous blog posts].

Alex: This is your first foray into self-publishing. How did you find it? Tell us how you compiled the anthology.

Michèle: The compilation was the easiest and most fun part of it. Thankfully, I was sent only really good stories, that did not require me to do much by way of editing/finding mistakes (and any typos and editing errors still found inside the book are naturally mine).

Getting it uploaded was much more difficult, and I have to thank Jennifer Wilson in particular for helping me with one problem that I couldn’t tackle – page breaks. Eventually, it all worked out more or less fine, but technology is not my strong suit, and wasn’t so while working on this project.

Alex: You’ve written both fiction and non-fiction about the period of the Wars of the Roses (with a new book on the way about King Richard’s brother-in-law the Duke of Suffolk and his nephew John, Earl of Lincoln, who also features in my own work-in-progress). Which type of writing do you find most satisfying and why? Do you have plans for more books – of either type?

Tomb of 2nd Duke of Suffolk and his wife, Wingfield Church (image from Wikipedia)

Michèle: I love writing both fiction and non-fiction, so that is a hard question to answer. If I really have to choose, though, I would say writing non-fiction is more satisfying. There’s something incomparable about finding out some tidbit about a person or an event that was previously unknown and being the one to write it down and share it with the world.

Less melodramatically, I like evidence and as such, writing books based on research and good evidence appeals to me.

That said, my sister keeps trying to convince me to write a book about Francis’ wife, Anne Lovell, to make her better known and try to correct at least some of the many misconceptions that exist about her. Since, sadly, not enough is known about Anne to make such a book a non-fiction one, it would have to be a novel, and maybe this is a project I will tackle in the future. And I would definitely love to write more non-fiction books, for example one about Richard Neville, Earl of Warwick, who I think is due a new study of his fascinating life. And another about William Stanley, a man who holds the dubious distinction of being disliked by both supporters of Richard III and those of Henry VII, but who was an interesting and, during his lifetime, very well-liked man. He deserves a balanced look at his life. And perhaps also a book about the FitzHugh family…

As you can see, I’m full of ideas.

Alex: What made you choose Médecins Sans Frontières / Doctors without Borders to receive the proceeds from sales of the Yorkist Stories? Do you have any personal connection?

Michèle: It was clear to me from the first that, given that authors from several countries would be contributing to this anthology, the proceeds would have to go to an international organization.  Médecins Sans Frontières / Doctors without Borders seemed to me the obvious choice. I have no personal connection, really, but I have admired them since I learned, as a diabetic child, how they try and treat children like me in even the poorest countries. I have never stopped admiring the courage of those working for this organization, and naturally I wholeheartedly support their mission.

In the current crisis, I can’t think of any organization that would be a more deserving recipient of whatever proceeds this anthology earns.

Alex: One final question: given the strange times we’re living through, how is your day different to usual? Have you resorted to anything ‘quirky’ to help you stay sane, or get you (and your family) through the days?

Michèle: Germany is rapidly moving out of lockdown at the time of writing and my work as a language teacher has started again, so that currently, my days are not very different from usual. When this project was started, though, I spent nearly all my time writing feverishly, to the point of writing nearly 80,000 words in the first three weeks of lockdown. By hand.

It helped me a great deal to have something, anything, to do during those days, but I am afraid I didn’t really do anything quirky.

Alex: Many thanks for coming on my blog today, Michèle – and best of luck with with the anthology. I  hope that I will be announcing a virtual launch for it very soon, as I’m sure readers will be keen to find out more about the book and the authors who have contributed. Loyaulte me lie!

Yorkist Stories: A Collection of Short Stories about the Wars of the Roses can be bought via Amazon: https://t.co/NkXMka20L1

Michèle’s biography of Viscount Lovell – Lovell our Dogge: The Life of Viscount Lovell, Closest Friend of Richard III and Failed Regicide – can be found at: https://www.amazon.co.uk/Lovell-our-Dogge-Viscount-Regicide-ebook/dp/B07VF9KGVN/

Michèle can be found on social media at:

1 Response to A new charity anthology of ‘Yorkist Stories’: an interview with Michèle Schindler