Posted on June 4, 2020 by alexmarchantblog

This summer the Historical Writers Forum is having another Blog Hop! This time it’s all about momentous events in history and we’ll all be sharing each other’s posts about these events – and hopefully whetting your appetite to discover more about them, and perhaps also more about the writers themselves and their work.

As my contribution, I’ve written about an event that took place on this very day – 533 years ago, and is currently very close to my heart…

England has experienced many invasions over the centuries – some successful, others repelled; some well known, others less so. In the latter category is the final act of what became known as the ‘Wars of the Roses’.

I’ve written about the Battle of Bosworth many times, in both fiction and factual posts. That was of course a successful invasion – by a quarter-Welsh, quarter-French pretender to the English throne, backed by the French crown in pursuit of its own agenda. It led to the English crown passing from the longest-lasting and most successful dynasty in England – the Plantagenets – to an almost unheard of (till then) family – the Tudors. (Which of course gives the lie to any suggestion that England hasn’t been successfully invaded since the Norman conquest in 1066…)

Richard III of England, prior to his defeat at Bosworth

With the Tudor propaganda message that the battle led to the unification of the houses (and white and red roses) of York and Lancaster, Bosworth is often incorrectly viewed as the end of the ‘Wars of the Roses’. But a later battle, almost two years later, is a more accurate end point. And that battle came following another, this time unsuccessful invasion, on this very date 533 years ago.

On 4 June 1487 a small army landed on English soil to challenge the right of Henry Tudor (now King Henry VII) to the throne. It had sailed from Dublin, and was made up largely of disgruntled Yorkist followers, Irish soldiers and a party of German mercenaries supplied by Maximilian, king of the Romans, and his stepmother-in-law, the dowager Duchess of Burgundy. Otherwise known as Margaret of York, the Duchess had been sister to two kings, Edward IV and Richard III, aunt to a third, Edward V, and was now aunt to a queen – Tudor’s wife, Elizabeth of York (though he hadn’t yet got round to crowning her…) 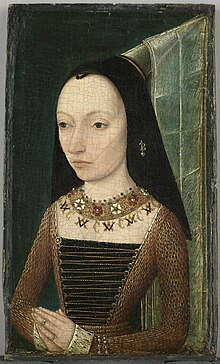 Margaret of York, Duchess of Burgundy

Just who was the focus of the invasion is still open to debate. The army was led by John de la Pole, Earl of Lincoln – nephew of those two kings, Edward and Richard, and cousin to both Edward V and Elizabeth of York. When his uncle Richard III was killed, John was the de facto heir, following the death of Richard’s little son Edward the year before; despite the subsequent death of his wife, Anne, in March 1485, Richard had not yet clinched a planned new marriage to either Joana, infanta of Portugal, or her counterpart in Spain, Isabel, let alone produced another heir of the body. Yet John of Lincoln was not the person on whose behalf the invasion was mounted – he was there to lead the army for someone else.

That person became known to later history as ‘Lambert Simnel’. But that name was part of a story that took several months to coalesce – into what became the ‘official story’ of the Tudor histories. That official story tells of a ten- (or eleven-?) year-old son of a joiner in Oxford called Simnel (or was he an organ-maker, or a baker, or a tailor? – the early histories contradict one another, and also there are no records of any such person by that name in the city at that time). The boy was supposedly plucked from his family home by a priest and taught all the manners and accomplishments of a prince of the realm so that he could impersonate Edward, earl of Warwick – another of Edward IV’s and Richard III’s nephews (who, conveniently, was already safely imprisoned in the Tower of London on Tudor’s orders). And then, having persuaded Margaret, Maximilian, the Yorkist nobles, the Deputy Lieutenant of Ireland, and even one of Tudor’s own heralds, that he was the said prince, the boy was crowned Edward, King of England and Ireland and Lord of France at Christchurch Cathedral in Dublin on 24 May, before being carried off to England by the Yorkist plotters as a figurehead for their invasion. And once the invasion had been thwarted, this innocent little boy was rewarded with a job in Tudor’s own kitchen – turning the spit…

The Dublin King, so-called Lambert Simnel, being carried from his coronation

That official story is full of contradictions and holes, and many increasingly doubt its likelihood for all sorts of reasons. The Dublin King by John Ashdown Hill and, particularly, The Survival of the Princes in the Tower by Matthew Lewis both outline the many inconsistencies in the story – and its development through 1486 and 1487. They also put forward the various candidates for the real person who was the pretender to the throne at the heart of the invasion. If you’ve read my novel The King’s Man you may have an idea of who I think he was – or may have been. And also you may have an idea who is at the centre of the novel I’m currently writing about the affair, provisionally titled ‘King in Waiting’.

But putting to one side all the speculation about who so-called ‘Lambert Simnel’ may have been, the facts that we do know about the invasion are still of interest. On Monday 4 June, the Yorkist army made landfall on what is now tiny Piel Island, off the southernmost tip of the Furness peninsula in Cumbria. They disembarked from their ships in the deep-water harbour sheltered by the great sandbar of Foulney, watched over by the red sandstone Piel Castle. The owner of the castle, the Abbot of nearby Furness Abbey, may have been there to greet his new-crowned king, and likely other local supporters, such as Sir Thomas Broughton, although he may already have joined the young king in Dublin – along with many other Yorkists unhappy at the rule of the new Tudor regime. Then the army set off across the saltmarsh towards the higher ground of the Cumbrian fells.

According to local tradition, they spent that first night camped on Swarthmoor, near Ulverston, and then the route taken beyond that is open to conjecture. Did they march north through the difficult terrain of the fells, or perhaps risk a crossing of the Sands of the Kent estuary and Morecambe Bay? While a dangerous undertaking, with local guides it was possible to cross the Sands safely even with herds of livestock and carriages: as late as the nineteenth century there was a regular stagecoach route across, so such a crossing by an army with all their equipment and beasts of burden was entirely feasible.

From there, gathering more loyal supporters, the army travelled north, then, via Sedbergh, into the west-to-east crossing of the northern Pennines where Garsdale leads into the familiar lush landscape of Wensleydale… I say familiar because this was the heartland of support for the previous king, Richard III, who had spent some of his youth there, at Middleham Castle, when in the household of its previous owner, his cousin, Richard, Earl of Warwick ‘the Kingmaker’ – and later made it the primary home of his wife and son.

It’s also where the first of my books telling the story of King Richard, The Order of the White Boar, is largely set. The fictional characters through whose eyes that story is told therefore know the dale well – and those who remain will likely feel a sense of relief to be back in such familiar surroundings after their travails since the fateful days following the Battle of Bosworth. Alongside them, also, on this march through northern England, is not only John, Earl of Lincoln – once the chief man in the Council of the North hereabouts under his uncle Richard – but also Francis, Viscount Lovell, once loyal friend and courtier of King Richard, and now a driving force behind this attempt to reclaim the throne for the House of York. Two previous attempts at rebellion by Lovell and his supporters had failed, but with a crowned king, a sizeable army, continental backing and more local supporters, such as the Scropes of Bolton Castle and Masham and Thomas Metcalfe of Nappa, flocking to them, he must have felt this invasion stood a chance.

Incredibly, by Friday 8 June, the army had reached Masham in North Yorkshire, from where King Edward sent a letter to the mayor of York requesting support and entry to the city. The army had covered 70 miles of difficult terrain in just four days – a remarkable feat by any standards. Sadly the request to enter York was turned down and the Yorkist army turned southwards. Several skirmishes were won by the Yorkists over small forces loyal to Tudor, which led to the Earl of Northumberland – loyal now to Henry Tudor, despite being imprisoned after the Battle of Bosworth – retreating back north of the city. York then declared its belated support for the new king. But the change of heart came too late: the Yorkist army had by 15 June crossed the River Trent and camped close to the village of East Stoke, not far from Newark.

The following day came the battle that brought this invasion to an end. At least 4,000 men died on the Yorkist side – the Irish and most of the English were given no quarter, although any surviving German mercenaries were allowed to leave the country. The Germans’ captain, Martin Schwartz, died alongside John Earl of Lincoln and Thomas FitzGerald, brother to the Deputy Lieutenant of Ireland. What happened to Francis Lovell is unknown, though stories abound: was he seen escaping, wounded, over the river? Did he eventually retreat up to Scotland? Or did he limp back to his one-time estate at Minster Lovell and die there – where a skeleton was found, bricked up, centuries later? (As the estate no longer belonged to him, this is perhaps the least likely outcome…)

And the young ‘Dublin King’? An eleven-year-old boy later named as ‘Lambert Simnel’ was found alive on the battlefield and taken into Henry Tudor’s royal household as a kitchen boy. But the initial report by a herald stated that the boy’s name was John… and two years later Irish lords brought to Tudor’s court, failed to recognize him as the young man they had crowned king at Christchurch. Had the royal herald sent to Dublin in early 1487 to investigate been correct when he described the ‘adolescent’ he met as someone who might well have been a Yorkist prince? Perhaps we will never know just who the ‘Dublin King’ was. But had his invasion succeeded, he would no doubt have become the true King of England too.

Watch out for the next stop on the Historical Writers Forum Blog Hop!

Alex Marchant is author of two books telling the story of the real King Richard III for children aged 10+, The Order of the White Boar and The King’s Man, and editor of Grant Me the Carving of My Name and Right Trusty and Well Beloved…, two anthologies of short fiction inspired by the king, sold in support of Scoliosis Association UK (SAUK). A third book in the ‘White Boar’ sequence, King in Waiting, will be published in 2021. Alex has also published a standalone timeslip novel for readers aged 10+, Time out of Time.